This is the final post from our 2018 Adventure to Paris. During our visit we explored many iconic locations including Notre Dame, Palais du Luxembourg, the Pantheon, Sacre-Coeur, and Musee d’Orsay; and I’m crossing my fingers that we’ll get back to Paris sooner rather than later to explore even more.

In the meantime, back here on the blog, I’m excited to share some of our more recent adventures to Kauai, Oklahoma, the Cook Islands, and MORE. (The writing may have stalled but the adventures definitely continued). 🙂

On our first trip to Paris we explored the world-famous Musee du Louvre and absolutely loved it! And although we still have an entire wing to explore within the Louvre, Cody and I wanted to spend some time at another famous museum in Paris: Musee d’Orsay.

Musee d’Orsay was originally constructed in 1900 as a railway station and hotel. However, within 40 years of completion the station was no longer able to accommodate the increasingly longer trains due to the shorter platforms within the station. So between 1939 and 1970-ish, the rail station served a myriad of different purposes, and after years of significant planning and reconstruction, Musee d’Orsay officially opened as an art museum in 1986.

Impressionism began in France so it is only appropriate that Musee d’Orsay would display a world-class Impressionism collection from some of the most famous artists in the World, including: Monet, Manet, and Van Gogh.

Okay, enough of the history lesson. 😉

For convenience sake, we purchased Museum tickets ahead of our trip and on the morning of our scheduled visit we left the hotel around 9am. Unfortunately, when we arrived to Musee d’Orsay we realized that even though we had pre-purchased tickets, we still had to stand in the long security line before we could enter the museum. I definitely understand the need for security, however, it would be nice to see a dedicated security line for those who have pre-purchased tickets (like at the Louvre). 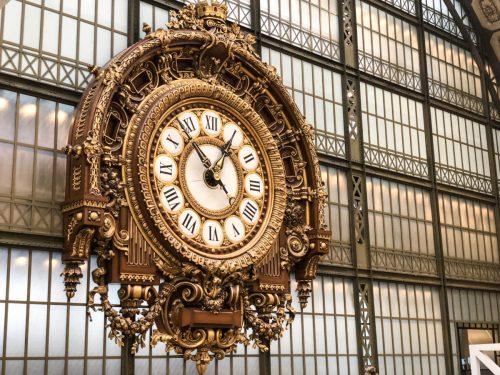 Alas, we made it in to the museum and spent the morning browsing the world-famous collection including “Starry Night over the Rhone” by Vincent Van Gogh and “Blue Water Lilies” by Claude Monet. And as we wandered throughout the museum I found myself fascinated by the impressionism technique. The layers of texture in these paintings is hard to convey in a photo, and there were a few times when I found myself wanting to reach out and softly touch the texture on the paintings (though, clearly, for obvious reasons, I restrained).

After a few hours the museum became quite crowded, so it was time to bid it adieu. We opted for a quick escape to enjoy lunch nearby and then indulge in an unhealthy amount of macarons. Because when in Paris…

If you’re drawn to Impressionism, you’ll absolutely love Musee d’Orsay! And even if art isn’t your jam, it was a neat venue to explore on a quiet Sunday Morning.

4 thoughts on “Our Morning at Musee d’Orsay”