“If we get lucky, we’ll see a lemon shark or two at this dive site.”

This was the last thing I heard right before I back-rolled into the aqua-colored water at our second dive site of the day. Because visibility was over 140-feet I could clearly see the reef over 45-feet below, and as I snorkeled over to our descent line I spotted a grey lemon shark swimming below.

“I see him down there!” I squealed through my snorkel and the other three divers quickly joined me in the water to see what all the fuss was about. We began our descent on what would end up being my most favorite dive to-date.

We had just finished diving with a handful of black tip sharks and two sketchy lemon sharks at Edin Gardens, our first dive site, and now before even beginning our next dive, we had spotted our third large shark of the day.

Throughout our forty-four minute dive this toothy friend followed us. Often times disappearing only to reappear behind us as though stalking us. The moment that we would look over our shoulder and see that she was there, she would disappear for a few minutes and then repeat her game of hide and seek. 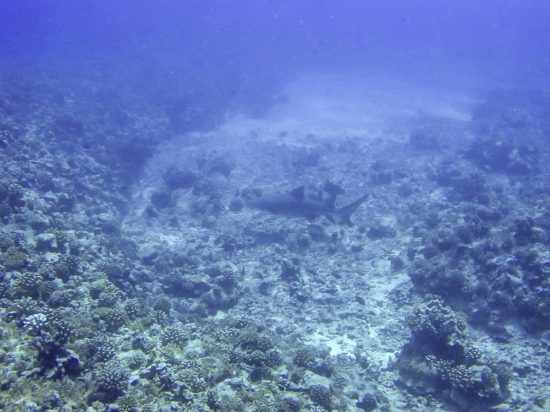 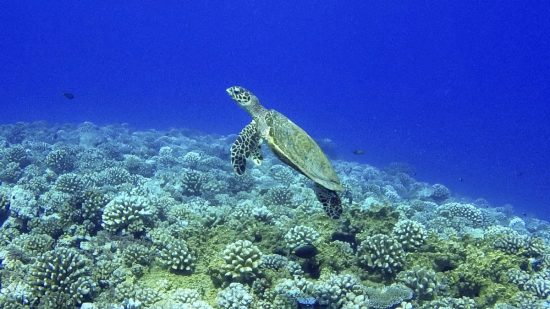 We glided over the reef ledge and saw a hawksbill turtle eating along the reef and out of nowhere the lemon shark appeared again. I looked towards the turtle, then to the shark, and back again hoping that this cute little turtle wasn’t about to be attacked by this seven-foot predator. Then just as quickly as my heart was beating, my thoughts turned to our own personal safety as I wondered if the shark would try to attack the turtle even as it huddled near our group (ahhh!)

Spoiler alert: No turtles or divers were harmed during the course of this dive. 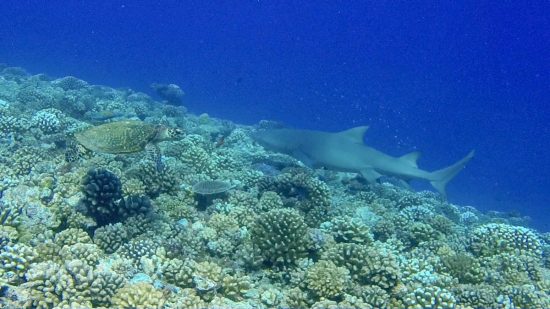 We saw three different lemon sharks during this dive and at one point one of the lemon sharks got within a few feet of myself — which I will totally admit was a little too close for comfort. I knew that we’d encounter schools of fish and swim over incredibly healthy reef during our dives, but I never thought I’d have the opportunity to come so close to so many sharks!

We’ve met a lot of great people in the dive culture and Christian at Mo’orea Fun Dive is right there at the top of the list of great dive masters. His personality was as welcoming as his hospitality and his energetic disposition was completely contagious. We began the day as strangers, and when Christian dropped us off back at the Hilton that evening, we departed as friends. After the traditional faire la bise and a friendly hug we said “Nānā” and hoped to see each other again soon.

How cool are those lemon sharks? Would you get up-close and personal with these fascinating animals or are you more of a “watch them from the boat” type of person?

6 thoughts on “When Life Gives you Lemons, Grab Your Camera”