June 4th was our one year anniversary and the husband and I decided that we wanted to go sailing over to the beautiful island of St. John. When we arrived at Morningstar Charters we found out that there would be one other couple sailing with us that day, and of course the Captain and his one crewmate. We specifically booked this trip because we knew it wouldn’t be crowded, and we were looking forward to a day of sailing on the sailboat named, Winifred.

My husband remarked on how calm and glass-like the ocean was that morning and one of the bartenders commented that it usually looks like that when a hurricane moves in. Luckily for us, that wasn’t the case, it was just one of those rare moments in the weather pattern. On our sail over to St. John the wind picked up and we were in fact able to do some sailing. What an amazing experience.

Our Captain, Captain Mike, took us over to a beach called Honeymoon Beach. One of the more famous St. John beaches, Honeymoon Beach is hard to access by land, but it’s worth the hike: when you arrive you will find a palm tree-lined, white sand beach, with the most beautiful turquoise water at its shoreline. The water is crystal clear and within that beautiful water you will find amazing sea life to snorkel with.

While at Honeymoon Beach, I spent about 45 minutes snorkeling with three of the sea turtles known to frequent the area. These creatures were graceful and beautiful in the water. They would come up for air right next to me, close enough that I could have touched them, (I didn’t because that’s not allowed), and to my surprise, a stingray joined in the fun. He swam in circles at the ocean floor and before I knew it, two more stingrays joined in his circle swimming.

Once I decided to let the turtles eat in peace, I began to swim over to the reef in order to view the many different coral formations and see more tropical fish. As I was swimming over, a nurse shark swam RIGHT next to me. I was shocked because he came out of nowhere: I was swimming by myself one minute and then looked over and there he was swimming towards the reef. (Now, let me insert a side note here. I promised my parents that on this trip I would not do anything too “risky.” I promised that there would be no sky diving, no swimming with sharks, or any other risky behavior. Oops! In my defense, the ocean is a big place, and the nurse shark must not have known that I made this promise only two days before…) 🙂

After we had enough time to snorkel in the water, Captain Mike took us to Coki beach on the eastern end of St. Thomas. This was when he surprised us by making a rope swing from one of the ropes on the sail. With a little push from the Captain we were able to swing clear out over the crystal clear blue waters and plunge into the depths below. Our Captain was even cool enough to teach me how to do back-flips off of the rope. After only a few times I was successfully doing back-flips off of this amazing sailboat in the middle of the Virgin Islands. (It was AWESOME!)

Oh, and I can’t write about our amazing day in the Virgin Islands, without mentioning the champagne lunch that was served, which included some of the most amazing BBQ chicken I have ever had. The recipe is a “secret family recipe” with an old story behind it…I will save that for a later post. 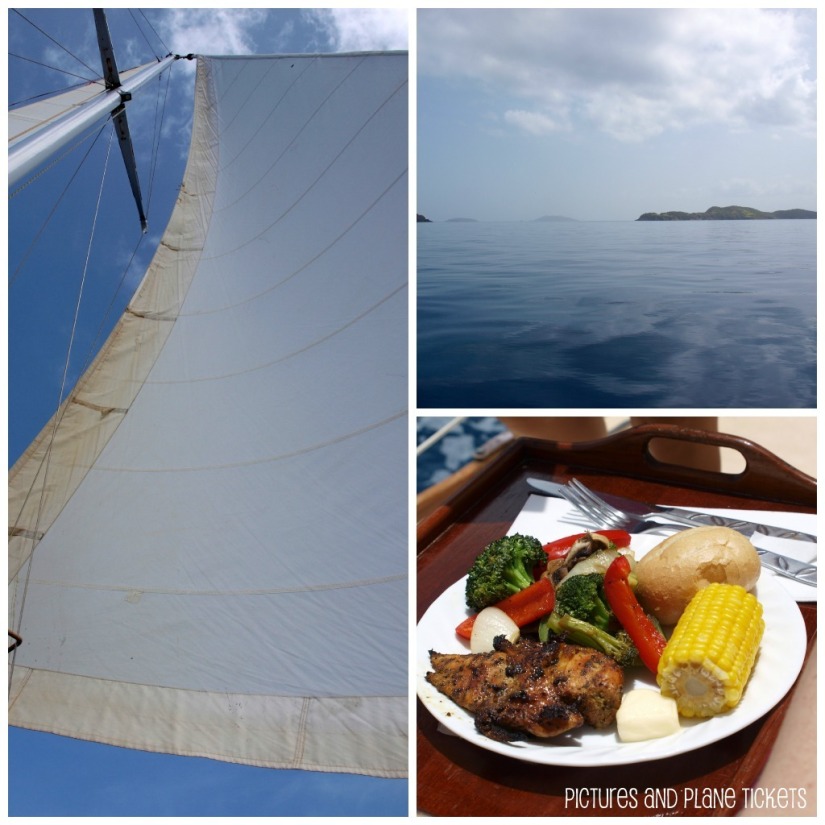 Sea Turtles, Sharks, BBQ’s, rope swings, a few “pirate pain killers,” an awesome captain, and my wonderful husband. I honestly don’t know if our one year anniversary could have been any better: it truly was a perfect day spent in Paradise.