As a young girl, my Sundays every Fall consisted of watching the Dallas Cowboys on TV with my dad and older brother. I am lucky enough to remember the “Dynasty Days” back in the Troy Aikman era, and even won a lot of money for a 10-year-old, off of Superbowl 30. (Don’t do the math, that was a long time ago). I’ve always said that I was born with Cowboys blood running through my veins, and ever since I can remember, I’ve dreamed of going to Texas to watch the Cowboys play.

This past weekend that dream came true when my husband and I traveled to Arlington, Texas to watch the Dallas Cowboys take on the Tampa Bay Buccaneers in their home opener. 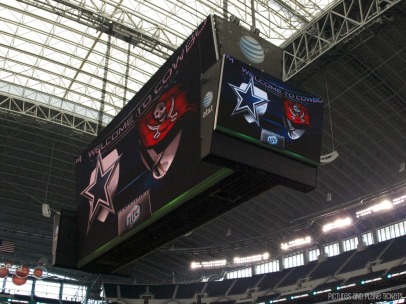 Our hotel was located less than a mile away from Cowboys Stadium, so as soon as we dropped off our bags we went to check out Jerry’s Palace. The city of Arlington is beautiful; the tree-lined streets were impeccably clean and some streets were even named after sports legends, like: Tom Landry Freeway, and Nolan Ryan Expressway (Rangers Ballpark is literally right down the street from Cowboys Stadium). As soon as I caught a glimpse of the beautiful silver dome, a smile spread across my face. That’s when it really hit me: We were here to watch the Dallas Cowboys.

Located at 1 Legends Way, this $1 Billion dollar modern-marvel is a sight to behold (Yes, that was a B, one BILLION, or $1,000,000,000–that is a LOT of zero’s). Being the largest domed stadium in the world, it’s hard to miss if you are anywhere near the stadium. It holds 80,000 cheering fans, has the (now) second largest high-definition screen in the world, and also boasts a retractable roof. 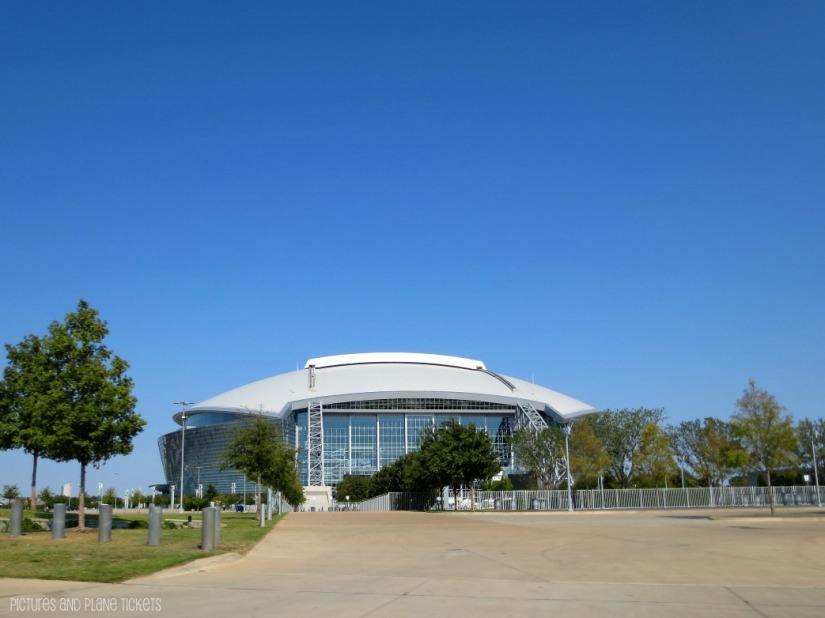 That afternoon we spent time walking around the grounds of the Stadium (it is beauuuuu-ti-ful), spent way too much money in the Pro Shop, and even got a glimpse of the field from the second level of the Pro Shop. My husband asked where our seats were in comparison to our current location, and he almost fell over when I replied that we would be well below where we were currently standing. 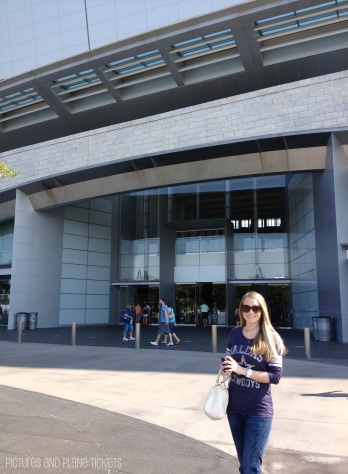 While walking around the Pro Shop something interesting happened. In the other pro shops that I have been to there has always been a small section for other NFL teams. As I looked around the Cowboys Pro Shop I realized that this was not the case in Cowboy Country. Don’t get me wrong, it makes sense; I wouldn’t want to see Giants-49ers-Eagles gear tainting my beautiful Cowboys Pro Shop either, but I still found it amusing.

When in Rome, do what the Romans do, and because we were in Texas, dinner at a Steakhouse was a must. If you are ever in the Arlington area, do yourself a favor and make sure you get reservations at Saltgrass Steakhouse. The service was excellent, the food was delicious, and the atmosphere was true Texan style. It’s true that most Texans say “Ya’ll,” at least around this part of Texas. 🙂

We capped off our evening with a few drinks back at the hotel and then spent the night discussing our excitement over the next day. As I tried to fall asleep, I felt like it was the night before Christmas. I couldn’t wait to wake up and start the day that I had waited for my whole life.

Up next, my dream day in Cowboys Stadium.